The Meeting was called to order by the association president, Tod Maclay at 12:15 PM

The meeting was adjourned at 1:30.

The POA contributes $1000 to the Thursday Night Fishing Club each year where they conduct walleye stockings.  Every other year the fishing club, with DNR approval, stocks walleye in Big Cedar.  This year, on Oct 28 and Nov 1, over 8,000 walleyes of 5 to 6 inches were added to our lake. 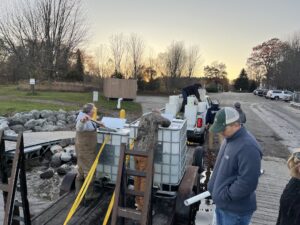 1) to be added to our e-mail list for news updates and announcements, or

2) send views and comments to your POA board,

in either case please fill out and submit the form below.